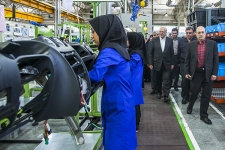 We had the honor of welcoming Mr. Mohammad Reza Nematzadeh, the Iranian minister of industry, mining and trade in Crouse. He was accompanied by a team consisting of high-ranking government officials, consultants and deputies including: Seyyed Reza Nowrouz-zadeh (CEO of the Industrial Development & Renovation Organization), Soheila Jelodarzadeh (senior consultant to the minister and former Member of Parliament), Mohsen Salehi-nia (deputy minister of industry and trade), Mohammad Goodarzi (head of the Public Relations and Information Center), and several deputies of Mr Nematzadeh including Amirhossein Ghanati, Ali Mirnejad, and Mohammadreza Mesforoosh.

Following a brief presentation about Crouse, the government officials and Crouse executives discussed the future of the automotive and auto parts industry, exchanged their views on the challenges facing the industry, and the countless opportunities which lie ahead. Among the topics discussed were the importance of localizing auto parts production and encouraging true privatization in the auto industry in order to increase the quality of vehicles in the local market.

Afterwards, the minister and his colleagues visited the Crouse 3 factory, where they inspected several of Crouse’s manufacturing lines including: airbag, ABS, bumper, dashboard, HVAC, cylinder block, trim parts, lamps and the fully robotic painting line. Mr. Nematzadeh emphasized the significance of constant improvements in the auto parts industry, and highlighted the importance of exporting auto parts to foreign car manufacturers. After the factory tour, Mrs. Soheila Jelodarzadeh congratulated Crouse on having such a high percentage of female workers (7,700 at last count, or roughly 75% of total workforce) which is very high compared to the predominantly male-centric workforce of Iran.